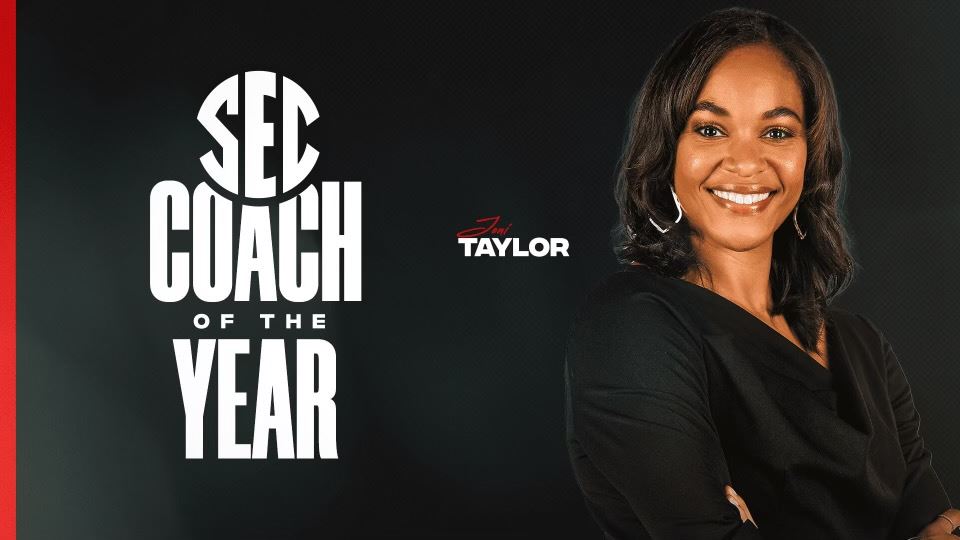 ATHENS, Ga. — Joni Taylor — who led one of the largest single-season turnarounds in Georgia Lady Bulldog basketball history—  has been named the 2021 Southeastern Conference Women's Basketball Coach of the Year, headlining an impressive list of All-SEC accolades for the Lady Bulldogs.

The announcement was part of the SEC's annual postseason awards release, which compiles votes cast by the league's 14 head coaches.

In addition to Taylor's Coach of the Year honor, senior guard Que Morrison was tabbed the SEC Co-Defensive Player of the Year and placed on the league's All-Defensive Team. Senior center Jenna Staiti was named a second-team All-SEC selection, while Lady Bulldog rookie Sarah Ashlee Barker earned a spot on the SEC All-Freshman Team.

Taylor — who is in her sixth season as head coach —  is Georgia's second SEC Coach of the Year winner in program history. Hall of Fame head coach Andy Landers earned the distinction in 1984, 1986 and 1996. Morrison is the second Lady Bulldog to earn the Defensive Player of the Year award. Sherill Baker took home the honor in 2006.

"To be recognized in this way by the outstanding group of coaches in the SEC is truly humbling," Taylor said. "My heart is full. Something like this does not happen without our incredible staff and players. This award is for them. I am truly grateful, humbled and honored to be the head coach at the University of Georgia.

"I am also so proud of Jenna, Que and Sarah Ashlee. To be recognized as one of the best in the SEC is an unbelievable accomplishment and one they will take with them for the rest of their lives."

The Lady Bulldogs earned three wins against top-25 teams this year, including the program's first season sweep of Tennessee since 1985.

Led by four senior starters who all earned their undergraduate degrees before the season began, Georgia has been a leader in the classroom and in the community under Coach Taylor. Last winter, the Lady Bulldogs led all SEC basketball teams (women or men) with nine honorees on the SEC Academic Honor Roll.

Individually, Morrison adds Defensive Player of the Year to an already distinguished career. After placing on the 2018 SEC All-Freshman Team and the 2020 SEC All-Defensive Team, the Riverdale, Ga., native battled injuries, including a season-ending shoulder surgery midway through SEC play last season. Morrison came back in 2020 to develop into one of the top players in the league.

Morrison led all SEC players with 33 steals in conference play and finished in the top-15 of the league in a wide range of categories, including steals, assists, assist-to-turnover ratio and free-throw percentage. Morrison is also a two-time SEC Academic Honor Roll selection and is pursuing a master's degree in sport pedagogy.

Staiti — an All-SEC second team selection — finished the regular season as the league's leader in blocked shots. Steady Staiti become one of the best players in the SEC and one of the top centers in all of basketball. Georgia's leading scorer and rebounder has reached double digit scoring totals in 27 of her last 32 games with 11 double-doubles during that time.

Sarah Ashlee Barker has had an impressive first season in Athens. The Birmingham, Ala., native earned the league's Freshman of the Week honor twice and played a role in nearly all of Georgia's big wins.

Barker hit the go-ahead shot to put Georgia up for good in overtime against Georgia Tech. She gave Georgia its largest lead of the game with a 3-pointer in the fourth quarter against Oklahoma and then played big minutes in the win against a top-25 Arkansas team. Barker finished with 11 points against Ole Miss and totaled four double-figure scoring games during the regular season.

Taylor, Morrison, Staiti and Barker will now lead Georgia into postseason play. The Lady Bulldogs are set to open the 2021 SEC Tournament this Friday at approximately 1:30 p.m. ET in the quarterfinal round.