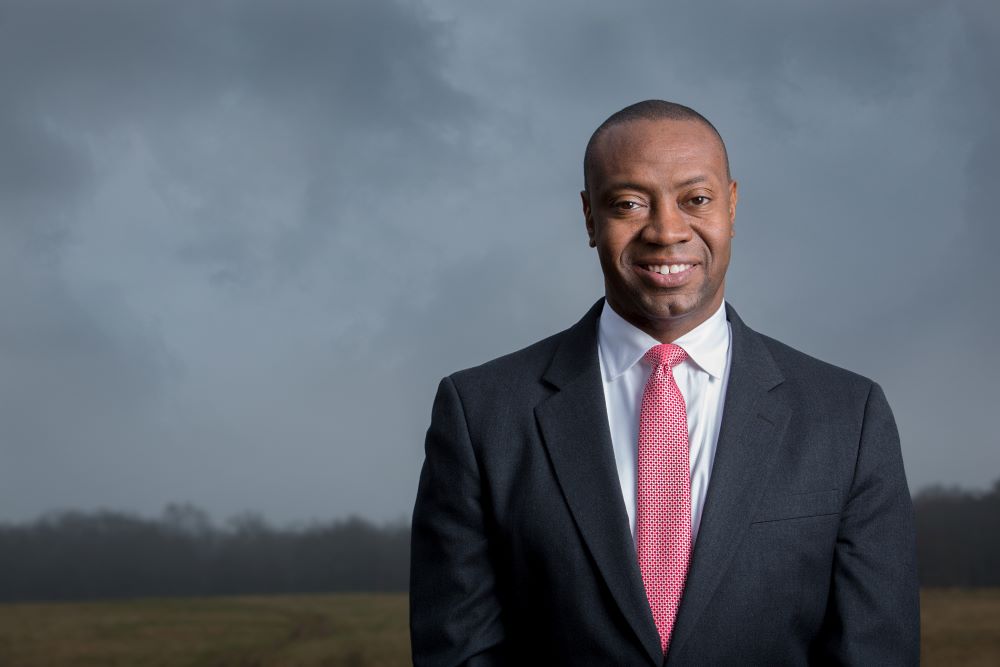 Athens, Ga. – J. Marshall Shepherd, the Georgia Athletic Association Distinguished Professor of Geography and Atmospheric Sciences at the University of Georgia, has been elected to the National Academy of Engineering, one of the highest professional distinctions accorded to an engineer or scientist.

Shepherd’s citation was “for development of methods to understand the Earth’s hydrometeorological and hydroclimate system, and for climate science public communication and outreach.”

“Dr. Shepherd combines scholarly expertise with an extraordinary dedication to engaging the public,” said S. Jack Hu, the university’s senior vice president for academic affairs and provost. “He is an inspiration to students at the University of Georgia and to aspiring scientists across America and beyond.”

A UGA faculty member since 2006, Shepherd is a leading international expert in weather and climate. He directs the university’s Atmospheric Sciences Program and is a professor in the department of geography, part of the Franklin College of Arts and Sciences.

Shepherd has authored more than 90 peer-reviewed scholarly publications, and his research has been supported by agencies such as NASA, the National Science Foundation and the U.S. Department of Energy. He recently chaired the NASA Earth Sciences Advisory Committee and was the 2013 President of the American Meteorological Society, the nation’s largest and oldest professional and scientific society in the atmospheric and related sciences. He was the second African American to serve in that capacity.

Public engagement has been a key priority for Shepherd, who is frequently sought as an expert on weather, climate and remote sensing. He is the host of The Weather Channel’s award-winning show Weather Geeks and is a contributor to Forbes Magazine. He routinely appears on media outlets and programs such CBS’ Face The Nation, NOVA, NBC’s The Today Show, CNN, Fox News and The Weather Channel. His Tedx UGA and Atlanta Talks are some of the most viewed climate lectures on YouTube. Shepherd is also frequently asked to advise key leaders at NASA, the White House, Congress, the Department of Defense, and officials from foreign countries. In 2013, he briefed the U.S. Senate on climate change and extreme weather.

Shepherd’s additional honors include being named a Fellow of the American Meteorological Society, receiving the Mani L. Bhaumik Award for Public Engagement with Science from the American Association for the Advancement of Science, the AGU Climate Communication Prize, the AMS Helmut Landsberg Award for pioneering and significant work in urban climate and the AMS Brooks Award. Former President George W. Bush honored him in 2004 at the White House with the Presidential Early Career Award. In 2015, he was invited to moderate the White House Champions for Change event.

“The election of Dr. Shepherd to the National Academy of Engineering underscores his stature as one of America’s leading experts on weather and climate,” said President Jere W. Morehead. “I extend my deepest congratulations to him on this significant honor, which is one of many that he has received over the course of his distinguished career.”

Prior to joining the UGA faculty, Shepherd spent 12 years as a research meteorologist at NASA-Goddard Space Flight Center and was deputy project scientist for the Global Precipitation Measurement mission, a multi-national space mission that launched in 2014.

His service activities include past membership of the Board of Trustees for the Georgia chapter of the Nature Conservancy, the National Oceanic and Atmospheric Administration Science Advisory Board, the United Nations World Meteorological Organization steering committee on aerosols and precipitation, and National Academy of Sciences panels on climate and national security, extreme weather attribution and urban meteorology.

Founded in 1964, the U.S. National Academy of Engineering is a private, independent, nonprofit institution that provides engineering leadership in service to the nation. Its mission is to advance the well-being of the nation by promoting a vibrant engineering profession and by marshalling the expertise and insights of eminent engineers to provide independent advice to the federal government on matters involving engineering and technology.

This release is available online at https://news.uga.edu/marshall-shepherd-academy-of-engineering/